I am the other, bringing difference

to your home-grown English classes.

The other, you thought you could

write away in wayward epithets.

I have too often watched your games

But I am determined that my dark diction

will complement your fair rhetoric.

On your small island world, you are

and metonymy with me, your heart

of darkness, your wistful medieval females

and dramatic monologues, that devilishly

mad woman in the attic, and the otherness

of that noble Moor.   I have caught you

deftly wiping away your wily symbols.

Spread eagled on the crisscrossed trellis

of your literary croft, my monsoon verse

clambers up in a whimsical arc of heady,

oriental jasmine, not honeysuckle or rose.

{From Usha Kishore’s debut collection, On Manannan’s Isle, 2014, recipient of an Isle of Man Arts Council Award and a Culture Vannin Award.}

'My poetry lives somewhere between India and the UK, breathing in the colours of exile, floating in an in-between space.  I call myself British Asian and consider my poetry a synthesis of my Indian roots and my British living space.  The poem “Otherness” is a sum-total of my experiences in the British Secondary English classroom. I am an alien here, the other, who interprets Shakespeare and Browning, lisping in my Indo-Anglian accent, determined to teach English Literature. The poem was published in my first collection, On Manannan’s Isle, 2014 and was written in response to various incidents in UK schools, where I have been subject to racial stereotyping. I think I am not unique here and hope that my “bold Indian conceits” and “monsoon verse” will help to combat racist attitudes that confront South Asians in British workplaces.'

Night Sky Between The Stars

Who says you are an island!

Our hearts if were the same

To afloat your words

Hiding the troubles of all waters

As songs, a quagmire

A sanctuary of migrating birds

You said you had glaucoma

Ah, the Darshan of a rainbow

As the symptoms go

The optimism was never a defeat, and

With the avatar of a new anthology

I am so glad that

Your glass is still half-full!

Have a focus for the words alive…

Note: Night Sky Between The Stars is the title of

I felt honoured when Yogesh invited me to write eSkylark’s first guest editorial, and of course I immediately accepted. But when I learnt that the Poet-of-the-Month was none other than Usha Kishore, my delight was many times compounded for she is a poet after my own heart. Through this editorial, I warmly congratulate her on receiving her Poet-of-the-Month Award Certificate – a worthy recipient indeed.

Usha’s poem ‘Otherness’ is from a debut collection whose originality, maturity and polish is remarkable. As a Keralite Indian poet, who speaks Malayalam, Tamil, Hindi, Urdu, and English; translates from Sanskrit; and lives in the Isle of Man; she knows the experience of ‘otherness’ only too well. Her award-winning debut collection On Manannan’s Isle is an exploration of both Hindu myths and Manx legends. In her own unique way, Usha blends cultures.

The author’s love of literature is another deep seam that runs through her verse, and is clearly influenced by her experience as an English teacher. Witness only the references in ‘Otherness’ to Charlotte Bronte’s “devilishly/ mad woman in the attic” and the ‘otherness’ of Shakespeare’s tragic hero Othello, “that noble Moor”.

In my review of the book for Kavya Bharati, I described her as ‘an intelligent, observant and passionate poet, who straddles the cultures of the East and the West’; and I looked forward to her next collection. As I write these words, her second collection Night Sky  Between The Stars is being launched at the Nehru Centre – another exceptional book that continues Usha’s journeys in mythology, a book her growing readership will relish.

Indian-born Usha Kishore is a British poet, writer and translator from the Sanskrit, resident on the Isle of Man, where she teaches English at Queen Elizabeth II High School. Usha is internationally published and anthologised by Macmillan, Hodder Wayland, Oxford University Press (all UK) and Harper Collins India among others. Her poetry has won prizes in UK Poetry competitions (the most recent being the winning poem in the Exiled Writers Ink Poetry Competition), has been part of international Foundations and features in the British Primary and Indian Middle School syllabuses. The winner of an Arts Council Award and a Culture Vannin Award, Usha’s debut collection On Manannan’s Isle was published in 2014 by dpdotcom, UK. A second collection Night Sky between the Stars has been published by Cyberwit India in January 2015.  Forthcoming is a book of translations from the Sanskrit, Translations of the Divine Woman, from Rasala India. Currently Usha is translating Kalidasa’s Ṛtusaṃharam.

Please Do not forget to visit Usha Kishore’s webpage for plenty more gems. 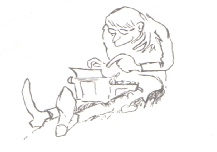 I don’t know if you were born

at dawn, and so named after

the goddess whose radiance

But when I read your verses,

by an eastern glow, stretching

between an alien shore

and a heaven of heroes.

chortling through faint mist and spray.

mixed with warm hues from our land.

Yes, you are indeed ‘Usha’.

Note: In Hindu mythology, the Ashwini Kumars are the twin sons of Surya, the Sun. Divine healers, they are the constant companions of Usha, goddess of the Dawn. Manannan is a Celtic sea-god and guardian of the Isle of Man.