Between its ideal freshness and its prime, to its rapid decline,
Lies the short history of the banana's brief life span.

Being an all year round fruit, it found its way into our home
Every day. Being the most affordable to people of limited means,

It provided us with the comfort of knowing even we could enjoy
The luxury of fruit three times a day. Because its skin spotted fast

And it rotted quickly, it was bought daily from the bazaar, or from
The vendor with the head-basket who did his daily rounds.

But an overripe banana is never to be wasted. For a sweet dish
You cut up round pieces, add a dollop of ghee, a dash of sugar,

And ground cardamom, and cook it for two minutes. Or substitute
Jaggery for sugar. Mashed or sliced pieces dipped in batter

And shallow-fried, make incredible banana fritters.
Lacking ovens or blenders, we could not bake banana bread

Or whip up smoothies. In south India, the plantain
Leaf is recycled as a disposable dinner plate. Cultivated for mass

Production in miles of plantations, banana trees also thrive
In back alley gardens fed by gutter water. The fruit comes in medley

Sizes, shapes, colors, textures, and tastes. Some are tinier than fingers,
Others as long and large as cucumbers. They grow in concentric

Circles around a thick trunk which has the appearance of an inverted
Conical tree. Lifting one of these branches is a muscular feat.

Some bananas are cooked in their raw stage but most others
Need to be matured for the market. This curvy, humble fruit can

Hold its head high for its simplicity, its sweet nature, its character
Traits, and its worldwide domination. In the native grounds where

It flourished, the state's regimes were branded, quite undeservedly,
As Banana Republics. Inevitably, the Empire, having lost its stride

And its nerve as well, was headed for a fall: triggering laughter,
The banana's slippery peel does make clowns of us all.

*   'Poetry is an art form with many definitions and functions. It is the flash produced by rubbing the flint of imagination to the hard edge of the universe. It captures the noise of everyday objects and vibrations of distant events. It is the framing of a statement, a new way of seeing. It records the choreography of human pretense. It is an agitation of the spirit in the act of finding a resolution in words. And so on.'

*   A lot in The Ocean In My Yard (Penguin, Rs. 250) is quite the "other world". The pervasive fragrance of attar or the elaborate rituals of praying, feasting and socialising during Id, etched in delicate detail, seem exotic precisely because of the unfamiliarity. In fact, this play between the personal-familiar and the mysterious-unfamiliar begins with the very title of the book.But even when it treads unfamiliar territory, The Ocean... does not lose its poetic intimacy. It was in keeping with this spirit of the book that Peeradina wanted his audience to make a semi-circle close to him for the reading of the book at Crossword. "These are like bedtime stories. I actually wish there was a fireplace!"                        -The Hindu, 31-06-2006

Also, in Saleem's own words, "I see that every book of mine has ventured into "new" territory whether in subject matter or treatment or both. In First Offence, it was urban satire, religious skepticism, movie culture, absence of nature, reported in montage style within a formal structure. In Group Portrait, it was a series of poems on family life and a longish biography that I later expanded into a prose memoir, The Ocean in My Yard. Meditations on Desire took off as a cycle of 64 one-page sections taking their cue from medieval Indian devotional poetry. In Slow Dance, there were Songs that were composed with prompts from old Hindi songs and ghazals. There was ekphrastic poetry too. and reflections on living the divided or double life of immigrants, body in one place, heart in another.

We met in the translation
With a third party language
As a tangent, oblivious
The warmth was installed

Then you came, an email,
Ekphrasis idiom
Through friends, remembered

Behold! The translation
is no longer lost

I write the above with a confession that I had read Saleem's work, but had no recollection of it when we exchanged emails. I mentioned Sitanshu Yashashchandra in one of our previous issues. It opened the email portal between us.


Saleem, a critically acclaimed poet, works towards achieving diverse things in each of his collections with profound clarity of purpose and a focused intensity, touching the sensitivity he has previously not explored. The poem I have chosen for this issue won my heart as, in its conclusion, it made us witness the (British) Empire slipping on its banana skin. In a true Charles Bukowski fashion I have no hesitation in enjoying the pratfalls of any arrogant great.

For me, it took the poem a stride further than being only introverted. I also liked Tavva from his forthcoming and unpublished collection mentioned later. I can never forget, a point made by Prof Brian Cox, a physicist, that every element and the star in the universe is working towards collapsing into the chemical element that is iron, assumed to be a perfect element! Nirvana of a kind: I wonder?


I have picked a poem from his new crop. Sorry for the pun, but these new poems are all delicious with fruits, vegetables, and masalas on a kitchen table of a paper. Only a poet can be a master chef of meanings, bringing in the whole world through a small window. However, it must be remembered that what is said here alone doesn't represent Saleem's work. In his new collection he has animal and bird poems as well.

Saleem Peeradina is the author of First Offence (Newground, 1980), Group Portrait (OUP, 1992), Meditations on Desire (Ridgeway Press, 2003), and Slow Dance (Ridgeway Press, 2010). He edited Contemporary Indian Poetry in English (Macmillan, 1972), one of the earliest and most widely used texts in courses on South Asian literature. The Ocean in My Yard, a prose memoir of growing up in Bombay, was published by Penguin Books, in 2005. A new collection of poetry, Final Cut, awaits publication.Meditations on Desire was recently published in Arabic translation by Kalima Publishers in Abu Dhabi, UAE.

His poetry is represented in most major anthologies of Indian, South Asian, and Asian American writing including The Oxford India Anthology of Poetry (1994), Living in America: Fiction and Poetry by South Asian-American Writers (1995), Contours of the Heart (1996), Uncommon Wealth (1997), Vespers: Contemporary American Poems of Religion and Spirituality (2003), The Bloodaxe Book of Contemporary Indian Poetry (2008), and 60 Indian Poets, Penguin Books (2008). His poetry continues to appear in journals both in print like World Literature Today, Kavya Bharati, Atlas, Wasafiri, and in online magazines like coldnoon.com, muse-india.com, undergroundflowers.com, sangampoetryhouse.com, and others. Ariel has also featured a long interview with him.

The Oxford Companion to Twentieth Century Poets (1994) carries an entry on Peeradina.

Please Do not forget to visit Saleem’s webpage for plenty more gems. 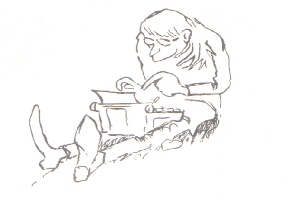