In the eastern village we are making ghosts,

although our seductive imprecation –

is not having the desired effect. Perhaps

we should have chosen a different venue,

one where distressed bricks don’t offer up

scratches as hugs, or the white-out windows

Instead all we have to give is the ferocious

smell of modernity rotting, disguised as a

tidal wave of black rubbish bags. Oh for any

sheen of beauty the arc light of history might

find: it touches the only art left to us:

the sepia haze of a fading cloud.

My starting point for any poem is that it should aspire to be sung speech – long before I discovered literature I was passionate about pop music in particular, and I hope that through my writing I can transport a reader – give them an emotional hit – that the best music does.

Beyond that, I write from a traditional English lyric perspective, but I like shaking it up, shoving too much modernity into older forms that can barely bear what they’re being asked to. What else? A keening sense of romance, geographic yearning; riffs on capitalism, geopolitics, identity and technology; and now and again, the gods and other mythic beings must intervene and have their say too.

Rishi reading his work at Waterstones Piccadilly, London, at the launch of his book

Ramanujan believed there are three types of poems: Text conversing with some other text, text conversing with the reflected text and text conversing with the text mirrored inside it. But we know, in some poets, the conversation overwhelms itself with a personal indulgence; in others’, it crushes itself with the intellect drawn from various references applied! In many, it is about the observations and their context! But for poets like Daljit and Rishi, it is not enough. Their focus is on the language itself, as a tool. It becomes a part of their craft. Rishi explores the landscape of language, tossing the net to his poem’s universe to capture the plethora of contexts at work. He is political in the sense that capitalism bothers him in all its aspects. He claims that music has played a great part in his poems. I must plead ignorance. Its presence in his poems is lost on me because Western music is not part of my life; I am much more at home with Indian music. But beware: he also draws a lot from history and geography. Rishi’s work is not for hitchhikers of poetry who expect an easy ride with the cheap shringar rasa of Mushaira. His poems make a heavy demand on you, but if you give yourself fully to them, the reward is a great enlightenment.

For example, the poem he has specially written for this issue, on its first reading, will not reveal its treasures. You will find clues by visiting this photograph at Flickr https://www.flickr.com/photos/jarahe/2481516055. Another clue is “gentrification, especially that which is artist-led...” The architecture or the city planning stolen by the bourgeoisie in the deprived areas being regenerated throttles the cultural character of the others living there. This brings Rishi back to his favourite theme of intellectual discussions on capitalism. But his latest collection of poems, Ticker-tape, is only a tiny statement on it. The poems are far ranging and personal too. I have many favourites. Buy it to see why. It is very rarely that we witness a new unique voice bursting out on the poetic landscape. Rishi’s is such an extraordinary voice. He raises the bars very high for all poets. I will not be surprised if Ticker-tape picks up some prizes. If not, it should.

Rishi Dastidar’s poetry has been published by the Financial Times, Tate Modern and the Southbank Centre amongst many others. His work has featured in the anthologies Adventures in Form (Penned in the Margins) and Ten: The New Wave (Bloodaxe). His debut collection Ticker-tape is published by Nine Arches Press.

A fellow of The Complete Works, the Arts Council England funded programme for BAME poets, he is a consulting editor at The Rialto magazine, and also a member of the Malika’s Poetry Kitchen collective. He serves as a chair of the London-based writer development organization Spread The Word, and teaches at The Poetry School.

‘Rishi Dastidar’s extraordinary debut collection, Ticker-tape introduces a distinctive new voice in poetry. This is a generously spirited collection with poems seething in tingly wit and pushing at the outer edges of what is possible in poetry. There really is no one else currently writing poetry quite like this.’ – Mona Arshi

‘These poems are perfected eccentricities who dance through the techno world. Urban wit rubs alongside innovative love poetry. Dastidar is at home “forglopned", in his “blipverts", on the way to Stavanger without a signal, enjoying a "Potluck Kinfolk style” or selling love at the Tsukiji fish market. Wherever he is, whatever he’s up to, I declare Dastidar to be one of the most ingenious, modern, thrilling, hilarious and tender poets writing today.’ 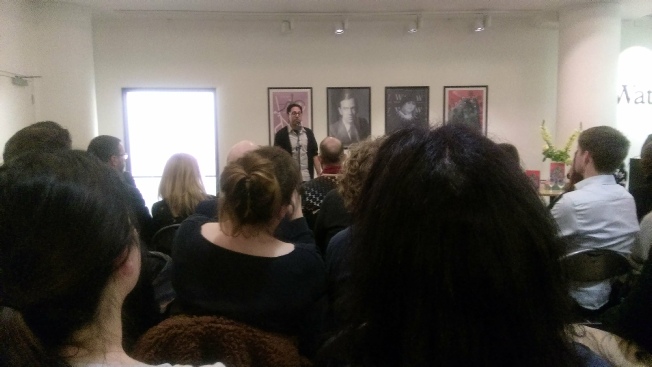