I pluck all this from my suitcase – its buckles dented, zipper torn.

Also pictures pressed into an album:

Parents by a rosebush,

Why have you brought us here?

Mist soars on the river, my door splits free of its hinges:

My children’s children, and those I will never see – Generations

Born to North American soil, dreamers in a new world.

I must pass through that rocking doorway,

Already in the trees finches are warbling, calling my name.

From 'Atmospheric Embroidery' (Hachette India, 2015).  © All rights reserved. Published with permission of the author.

This poem was composed for the exhibit Beyond Bollywood: Indian Americans Shape the Nation, Smithsonian, Washington DC, 2014-2015. The first stanza of the poem appears on the wall of the exhibit on the left, just as you enter, above a trunk filled with various articles that a migrant might have brought with her.

The hope is that in asking these questions we might muse in however provisional a fashion on the precarious nature of truth as it appears in the poem, the making and unmaking of landscapes, and how poetry and history are bound together even as they split apart.

Landscape permits the present to irradiate what we feel of the past, so that elements of our lives start to clarify and take shape within the symbolic space of the poem. Making a poem in this way has to do with allowing one to exist in the present, freed but not shorn of the burden of a past -- lacking which the self could not in fact exist.

And perhaps this is the paradox on which the poem turns, acts of attention, acts of love creating a counter-world, momentarily freed of time.

But what of our shared life?  The Italian poet Eugenio Montale speaks of `the second life of art’-- a life that goes beyond form into shared memory, even if what is shared is just with one other person. He speaks of this as the poem’s `obscure pilgrimage through the conscience and memory of man.’

It seems to me that the lyric poem is a form of extreme silence, which is protected from the world. To make a lyric poem one has to enter into a dream state. But at the same time, almost by virtue of that disconnect, it allows one an intense space to reflect on the world.

It was well past dawn the other morning when I woke up, the sun though not visible, was clearly shining beyond the window frame. Through that same window, above the stark branches of a winter tree, the full orb of the moon was visible.

In my sleep I had been tossing and turning about the various snares I had set for myself in proposing such a hard topic -- linking poetry and history.

Then suddenly it came to me in the way that images do, with their sharp clarity -- history is the sun. It will burn us if we get too close. Poetry is the moon with its incandescent glow, utterly ephemeral.

Might one think of the poem itself as coming into existence at the precise moment when the self, with all the mess and baggage of our ordinary life, vanishes?

What kind of transmutation of subjectivity are we speaking of here?

I think of the intensely personal archive that each of us possesses -- precisely what gives materiality to the poem -- the pungent and precious power of the sensorium, the sight, sound, smell, touch and taste that make up our being in the world, utterly real yet constantly vanishing, available to the poet as a delicate repository. This is what one might think of as the traces, the original inscription of rasa, ephemeral base from which the poem is translated into existence.

Abhinavagupta c. 950-1020 CE realised this clearly. In his reflections he writes of how poetry far from dealing with the literal, reaches into what lies in memory, in memory fragments. It is in this way that rasa, the quick of aesthetic pleasure, is reached:

On the other hand rasa is something that one cannot dream of expressing by the literal sense. It does not fall within workday expression. It is rather of a form that must be tasted by an act of blissful relishing on the part of a delicate mind through the stimulation of previously deposited memory elements... beautiful because of their appeal to the heart... the suggesting of such a sense is called rasadhvani and is found to operate only in poetry. This in a strict sense is the soul of poetry. *

There are many sorts of translation, from muteness to speech, from the fitfulness of feeling to the steadiness of inscription, from a landscape known and loved to another still unfamiliar and new, from one language and its culture to another.

The zone of the poem is where dreams cross language. And with the rhythms of composition the invisible enters. As a young poet the here and now was never something I could take for granted. To be somewhere, was also to not be somewhere else.

I now think that each rock,each root, even in the garden of my earliest childhood, carried its own shadow. In the poem, the visible and the invisible are entwined and place becomes a living palimpsest.

Mine was a one-way ticket to home

While the rough seas cradled you back and forth

Blanketed by the canvas of nothingness

To enjoy, discover the reflection of Blues

Finally in Harlem, where Sita sinks in a manhole

Waving at you: Goodbye? Help?

You don’t answer, and disappear at the banks

Of Thousand Rivers, in the cracks of bowery

Where you cut and couple*

Your images with Phillis Wheatley

Yet again to discover the blue:

In a place where you have nothing left to lose.’

They won’t give you a Pulitzer

But I am glad, still, your

In a City of Burning Towers**

** A poem that was read quite a lot in the USA after 9/11. It is from poet's, Raw Silk (TriQuarterly Books/ Northwestern University Press, 2004)

Note: Many images in the poem above are from the Poet’s new collection, Atmospheric Embroidery.
Note: Night Sky Between The Stars is the title of

Meena peacefully passed away in 2018

Meena Alexander's  eighth book of poetry Atmospheric Embroidery has just been published in India (New Delhi, Hachette India, 2015). Her works include the PEN Award winning book of poems Illiterate Heart,  and Birthplace with Buried Stones (published by TriQuarterly Books/ Northwestern University Press). She is the author of the critically acclaimed memoir Fault Lines (one of Publishers Weekly’s Best Books of the Year.  She has also published  two novels ; two books of essays on poetics and two academic studies. She is the editor of  Indian Love Poems (Knopf/ Everyman’s Library). Her poems have been widely translated and set to music, most recently by the Swedish composer Jan Sandstrom, performed in Stockholm by the Serikon Music Ensemble and the Swedish Radio Choir. Her awards include those from the John Simon Guggenheim Foundation, Fulbright Foundation, Arts Council of England and the Rockefeller Foundation for a residency at Bellagio. In  2014 she was named a National Fellow at the Indian Institute of Advanced Study, Shimla. She is Distinguished Professor of English, Graduate Center/ Hunter College, CUNY. www.meenaalexander.com 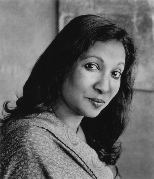 'In Atmospheric Embroidery, Meena Alexander’s eighth book of poems, she continues this journey as witness and cartographer, drawing from Christian, Hindu and other mythologies, revisiting the beginnings of her dislocation and assimilation into different lands. Among other things, Alexander, who has lived in India, Sudan, England and the U.S., explores Mappa, a series of embroidered maps of the world, created by Italian conceptual artist Alighiero Boetti, from which the title of the book is likely inspired.'

With their intense lyricism, Meena Alexander’s poems convey the fragmented experience of the traveler, for whom home is both nowhere and everywhere. The landscapes she evokes, whether reading Bashō in the Himalayas, or walking a city street, hold echoes of otherness. Place becomes a palimpsest, composed of layer upon layer of memory, dream, and desire. There are poems of love and poems of war—we see the rippling effects of violence and dislocation, of love and its aftermath.

A Poem to Honour Meena Alexander

Meena Alexander’s poems in ‘Atmospheric Embroidery’ yet again present Meena to us as a poet about whom one cannot be ignorant. The intellect can be a handicap for many academics when it comes to cutting through the dryness to touch the sensitivity in their ambiance as a poet, and rescuing it from the doldrums of any mechanics of life. These poems have no such inhibition; instead they are also loyal and honest to their ‘Atmospheric Embroidery’. The poet in her childhood made yearly journeys between Sudan and Britain. Therefore, there is a selection in the book, ‘Indian Ocean Blues’. These journeys, enveloped in an endless pallav of mother’s blue sari, remain always in the background as a serene or challenging fabric of solitude cherished as an observer with a transcendental vision. This allows her fiercely to be an Indian and an American coaxially, juxtaposed. That’s why ‘Inwood Sita’ was another poem of my choice: Sita disappearing in a manhole mid-Manhattan.The blue of the Indian Ocean also translates into Blues music.  Kabir was equally critical of Hindus and Muslims. So, in the 9/11 tragedy, with the sari balled to protect the narrator from the flying shards of shattered humanity by misguided religious blindness, Kabir appropriately surfaces with:

in times of grief

Meena thus manages these two beings in a kind of ‘Univocity’. This is the poet who borrows the same oneness from Boetti’s embroidery; ‘Thousand Rivers’ or the collage of the flags. It is all for the sake of reassembling her and the reader’s broken ambiences which exist as pieces or shards. She hopes, drawing on Celan, her kaleidoscopic message in a bottle in the sea, which has been with her all along, reaches to us as a poem. Obviously, as in her poem, ’Fragment, In Praise of the Book’ the poet’s obligation is very clear: ‘Book of alphabets burnt so the truth can be told.’ God, the alphabet, the beginning, must be removed, to understand the truth.

The poem chosen here represents a poignant historical poking into our psyche pertaining to the journey we have made, and it has no end; with a continuous migratory question raised by our paraphernalia even after our demise: ‘Why have you brought us here?’ This is the life echoing the same question. Perhaps confronting the soul. Reconciliation comes at the end with this line: ‘Already in the trees finches are warbling, calling my name.’ A familiarity precipitating, and thereby sealing the journey’s end.

I have thoroughly enjoyed Alexander’s work, and I hope you all will too. So it is appropriate that we honour Meena Alexander with Word Masala's Award.