Our event at the House of Lords packed with readings, projects, awards and book launches was a great success.

The late Meena Alexander, Kavita A Jindal and Sid Bose

Videos and more photos at http://www.skylarkpublications.co.uk/audiovideo.html

Buy from our shop now

All profit donated to various charities

A journal of contemporary international poetry

Thank you for visiting us at Skylark Publications UK

Skylark was launched in 1969 in India as a quarterly on the contemporary literature in translation by the late Baldev Mirza and Yogesh Patel as its editors. After 100 printed issues and a few books, it completed its journey. Reinvented, its independent journey began in England as the publishers with plans to help diasporic writing and expat literature.

It is currently promoting South-Asian poets and writers through various channels, including Word Masala books, events, awards and ezine. In 2015, it has started honouring very important poets of the Diaspora dedicating once a month an ezine to one of the ranks as a Poet-of-the-Month. The ezine is extremely successful in achieving many objectives. Please find out more here.

Word Masala, a non-profit Foundation has Lord Bhikhu Parekh, Lord Dholakia,  as its patrons and Dr Debjani Chatterjee MBE as a Consultant Edior. It aims to promote the Diasporic writers and poets through various channels.

We have started honouring South-Asian poets each month through our ezine, highlighting their representative poem, and their bio. Every month  the ezine is packed with  very useful information on markets and submissions open. Find out what else we offer by clicking here.

Poetry is a window to your soul. Look into it through us.

Current requirements can be found here.

Please join our group to help each other. Write a review on a book by the other members. Then ask us to submit it to the selected magazines for you if you cannot.

The first British-Indian poet in this series is MONA DASH a fresh emerging voice with one collection already under her belt in India.

Help us to raise the funds with your normal online shopping.

Reception at the Palace

Yogesh Patel with The Queen representing poetry and the Word Masala Foundation. The breadth of our work across is now internationally sought and enjoyed by many poets. The invitation at the Buckingham Palace was for the launch of UK-India Year of Culture 2017. Thanks to British Council and Baroness Prashar for making sure that poetry and its impact on our lives

were not forgotten in the cultural aspects where celebrity, fashion and business dominate.

Buy our new books and support us

You can order them from Waterstones, Foyles, Nielsen’s Booknet , Gardiner, Balckwell, Starkmann, Ingram and most booksellers worldwide.

Nominations for the awards

Poets are primarily nominated by our present winners, the editor, the guest editors, and patrons of Word Masala. But we have a panel as well. 2019/20 panel is listed above. This then leads to further consultation in the background with feedback received from a wider group. Reading their work becomes an important part of this process. The decision of the Director of Word Masala Non-Profit Foundation, with the agreement of the patrons Lord Parekh, Lord Dholakia and Malhar Patel, the Publisher-Director of Skylark Publications UK, is final. An invitation is then issued to the respective poet. More on Yogesh Patel here>>>>>>>

The awards are not automatic as we have a responsibility to acknowledge and celebrate the extra-ordinary achievements of our featured poets. Hopefully, this will also draw urgent attention to their work from magazine editors, publishers, agents, and libraries.

For collection A Dinner Party in the Home Counties

Be first to order it for 25th October

Reshma Ruia is the author of two novels, Something Black in the Lentil Soup and A Mouthful of Silence, shortlisted for the SI Leeds Literary prize. Her short stories and poetry have appeared in British and international publications and commissioned for radio. She is the co-founder of The Whole Kahani-a writers’ collective. Reshma receive  the Word Masala Debut Poet 2019 Award fin August at the Nehru Centre.

It is highly unusual, and therefore incredibly exciting, to read post-colonial poetry that can best be described as quirky, even playful. In this strange, provocative and often powerful collection, form, content and style create difference and otherness, they don’t just explore it thematically. Every time you think you’re reading yet another poem about identity or the shape of current Britain, you realise you’re simultaneously in the presence of a witty, clever and original writing-mind. I found myself wanting to simply say, despite the humour, important messages, and striking imagery, I really like this – because it’s the exact opposite of whatever stale, obvious, is.

Please see the link below to pre-order the book now.

You will be supporting our  NON-PROFIT project.

The foundation promotes South-Asian diaspora poets and writers by awarding them for their excellence in poetry. Instead of a monetary prize, it helps by working as a noncommercial agent for them, helping with the reviews, highlighting their work through its publications and magazines, organising readings and programmes, and placing articles and interviews where possible. The foundation is a non-commercial thrust and believes very strongly in working with our Western counterparts. It recognises all good work they do as struggling small and large presses. For that, it awards them with a recognition plaque highlighting their efforts in diversity. We work to help them for the books by South-Asian diaspora poets and writers.

You can also help by joining our growing list of subscribers and by buying books by our award-winning poets and writers. 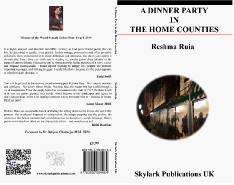