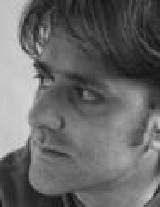 Our town in England with the whole of India sundering

out of its temples, mandirs and mosques for the customised

streets. Our parade, clad in cloak-orange with banners

and tridents, chanting from station to station for Vasaikhi

over Easter. Our full moon madness for Eidh with free

cars. Our Guy Fawkes' Diwali - a kingdom of rockets

for the Odysseus-trials of Rama who arrowed the jungle

Our Sunrise Radio with its lip sync of Bollywood lovers

pumping through the rows of emporium cubby holes

whilst bhangra beats slam where the hagglers roar

at the pulled-up back-of-the-lorry cut-price stalls.

A Somali cab joint, been there forever, with smiley

Our cafes with the brickwork trays of saffron sweets,

Reveries of incense scent the beefless counter where

into thin bags topped with the proof of giblets.

on park-shots of Bacardi - waxing for the bronze

eye-full of girls. The girls slim their skirts after college

point for poled yards of silk for own-made styles.

The mother of the runaway daughter, in the marriage

with tuxedo-boys from the whole of our India!

Our Town with the Whole of India!

"...get rid of the vague statements that sound() good but (are) probably undermining the overall design of the poem.."

'It (is) possible for someone to write about 'Asians' and be successful in poetry..'

Read about Daljit and listen to him reading his poems at the Thought Fox:

Daljit Nagra has turned out to be an inspiration and an aspiration for all Diasporic South-Asian poets. With many celebrated awards, like the South Bank Show Decibel Award as well as the Forward Prize for Best First Collection, and many prestigious positions to his credit, be it as the Keats' House Poet-In-Residence as well as the Lead Poetry Tutor at The Faber Academy, he still remains very humble and grounded to his roots. That simplicity creates a unique place for him in our hearts.

The embroidery of the images in a poem in this issue is not only coherent, precise, and haunting, but fetchingly narrative, in the tradition of artistic approach of the Padmashri Gukam Mohamed Sheikh, also a renowned poet, and Bhupen Khakhar, where the paintings tell us multiple stories, on one canvas, and in a singular time frame. As third party observers we become privileged to be in all those happenings at the same time. The poem I have chosen for this issue does exactly that. We are in the realm of a sea of stories, as one of Salman Rushdie's novels explores. The poem is not only in the finest tradition of English verse that is culturally chronicle, but is also an all embracing sensory experience to allow us to grab an Indian perception of the ambience in our alienation as permanent immigrants, weirdly the Trishanku British; but not English, Welsh, Scot, or Irish! A context of the limbo state applies to the Diasporic writers dispersed internationally. I have been an advocate of Diasporic writing that highlights our experience as these Trishankus. A very few have truly managed to be sincere in this undertaking. Daljit is refreshingly brilliant, honest, and original in this rank.

However, he is not limited to this approach. One just needs to look at his other anthologies, including the latest Ramayana, short-listed for the T S  Eliot Prize, retold uniquely from a poet's imaginative slant. I dare you all to buy that, and the other anthologies from this extra-ordinary Diasporic poet. Unlike Salman Rushdie, he needs no help from controversy. So, in honouring him as a Poet-of-the-Month, frankly he honours us.

Daljit Nagra comes from a Punjabi background. He was born and raised in London then Sheffield. He has won several prestigious prizes for his poetry. In 2004, he won the Forward Prize for Best Individual Poem with Look We Have Coming to Dover! This was also the title of his first collection which was published by Faber & Faber in 2007. This won the South Bank Show Decibel Award, the Forward Prize for Best First Collection and was nominated for The Costa Prize, The Guardian First Book Prize, the Aldeburgh Prize and the Glen Dimplex Award. His second collection, Tippoo Sultan's Incredible White-Man  Eating Tiger-Toy Machine!!! was shortlisted for the TS Eliot Prize. His current book, Ramayana, is shortlisted for the TS Eliot Prize. In 2014 he won the Royal Society of Authors Travelling Scholarship Award.

Daljit has been on the Board of the Poetry Book Society and the Poetry Archive. He has judged the Samuel Johnson Award 2008, The Guardian First Book Prize 2008, The Foyles Young Poets Competition 2008, The National Poetry Competition 2009, the Costa Poetry category and the overall winner in 2012. He has also hosted the TS Eliot Poetry Readings 2009. He is the Keats' House Poet-In-Residence from July 2014 - June 2015, and he was an Eton College Wisdom Scholar in November 2014.

He is the Lead Poetry Tutor at The Faber Academy and has run workshops all over the world.

He is a regular contributor to BBC radio and has written articles for The Financial Times, The Guardian, The Observer, The Times of India.