Looking with apprehension over the shoulder.

The whiplash of patriarchal authority

Spurred the hot pursuit to smoulder

As the blacksmith’s anvil came down

To forge a union of handfasting ardour.

This was cupid’s green where Hymen

Today when we drive back from English vales

The smithy’s shop beckons with a dram

To celebrate the freedom to love and live

That trickles through the sluice gates of social dams.

This is my signal of homecoming, across an invisible border

Which I would never like to see barricaded by an order.

I started writing when I was seven, when the music of poetry captivated me. It has remained my first love - magical and mesmerising. It is a weapon I feel I can use to wield when angry or troubled. It is my veena which can play the deepest chords hidden from my consciousness. I sometimes feel like a juggler with words, trying to keep many balls spinning in the air. I would like to invite my audience to catch the balls and share the meaning – sometimes intended, sometimes suspended, but waiting to be plucked at the right time.

Bashabi Fraser was born in India and is currently Professor of English and Creative Writing and co-founder and Director of the Scottish Centre of Tagore Studies (ScoTs) at Edinburgh Napier University. Her recent publications include The Homing Bird (2017), Ragas & Reels (2012), Scots Beneath the Banyan Tree: Stories from Bengal (2012); From the Ganga to the Tay (2009); Bengal Partition Stories: An Unclosed Chapter (2006; 2008), A Meeting of Two Minds: the Geddes Tagore Letters (2005) and Tartan & Turban (2004). Her awards include Outstanding Woman of Scotland, Saltire Society; Rabindra Bharati Society Honour for promoting Tagore Studies in Europe, 2014; Women Empowered: Arts and Culture Award, 2010.

When she first came to Scotland in 1985, she came across several people who cornered her at dinners and receptions or hailed her on the street to ask her, ‘where are you from?’ Her answer, ‘from India’ was the anticipated one, which brought on nostalgic memories of time spent in India, of a father who had served in the Indian army, a mother who was married in Calcutta, a cousin who went to school in Uti, an uncle who traded in Karachi or a grandfather who was born in Assam. Bashabi then went on to do several oral history sessions with Scots who had worked and lived in India and discovered that there was a fragment of India in every Scot, through friends, family members or ancestors who had some link with India preserved in personal journals, photographs, family film footage and artefacts brought back from India.

Bashabi Fraser is one of those people without whom Scotland would be a poorer, colder place, less nourishing of the vitalising sense of difference and diversity from which life arises. Her poetry is populated by individuals, relations, mothers and fathers and ancestors and children, people of all kinds from different parts of the world. And it’s filled with geographical reference, most emphatically to Scotland and India, both as nations – with both the strengths and liabilities that word carries – and to locations within those nations, to which people are connected in vital and vitalising ways. Her poems breathe good sense and good humour, a sympathetic spirit, the intrinsic optimism of curiosity and the inherent and integral authority of sensitivity. They do not overrule the reader as some poems try to do; nor do they insinuate duplicitously, as others sometimes do; rather, they lay out there propositions and ideals, yearnings and needs, their senses of what is humanly gainful and what is to be rejected for the sake of our own humanity. Like their author, they are indefatigable and persistent, but always to be welcomed. And you learn from them, return to them, take pleasure in them, thankfully.

Bashabi Fraser is a poet and children’s writer. She has several publications and has been widely anthologised.

Her awards include Outstanding Woman of Scotland 2015, Saltire Society. Bashabi is Professor of English and Creative Writing and Director of the Scottish Centre of Tagore Studies (ScoTs) at Edinburgh Napier University. She lives and writes in Edinburgh.

Bashabi Fraser poignantly conjures up haunting poetical narrative stemming from the quandary of living in dual cultures concurrently - the stages being Edinburgh and Kolkata -with the cultures jostling. These poems are a colourful sari blanketing Scotland with inner conflicts of a migrant 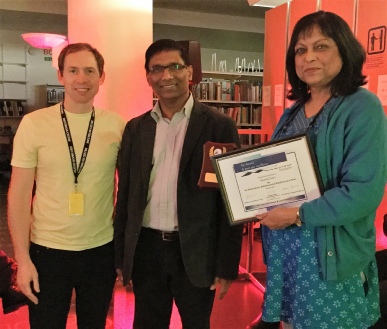 ALAN RIACH  is the Professor of Scottish Literature at Glasgow University, Convener of the Saltire Society and past-President of the Association for Scottish Literary Studies, 2006-10. He is the author of numerous books and articles. He has recently published highly-acclaimed English-language versions of the great 18th-century Gaelic poems, Duncan Ban MacIntyre’s Praise of Ben Dorain and Alasdair Mac Mhaighstir Alasdair’s The Birlinn of Clan Ranald and edited The International Companion to Edwin Morgan (2015) and The Hunterian Poems: Poems to Paintings from The Hunterian Collection at the University of Glasgow (2015). Wild Blue: Selected Poems was published in a bilingual English/Polish edition by the University of Gdansk in 2014. Since 2001 he has been working in Scotland.